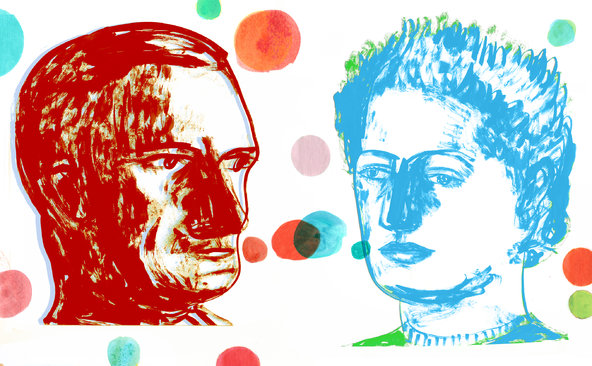 Three days after her double mastectomy for recurrent breast cancer, Elissa Bantug, then 25, needed to feel whole again. But when she expressed a desire for intimacy, her fiancé (now her husband) walked away, leaving her feeling hurt and angry and worried about their future together.

Weeks later she learned that his rejection was based not on any lost love or attraction, but on the fear that he might hurt her physically.

“I was just guessing,” Ms. Bantug said in an interview. “It would have been really helpful to hear his thoughts, fears and concerns.” But she admits she did no better at expressing her own.

All through the postoperative ordeal and chemotherapy, she said, “I did a bad job of communicating my needs. I would tell him I’m fine when I really felt awful, and then I would resent the fact that he didn’t take care of me.

“It was really hard, but we got through it because we love each other,” she said. “He finally told me: ‘I want you alive. I don’t care what your breasts look like.’ ”

Recognizing the importance of honesty and communication when cancer strikes, Ms. Bantug, now 31, went on to run a cancer survivors’ clinic at the Johns Hopkins Breast Center, helping other couples through the cancer experience. She spoke frankly of her own ordeal with Dan Shapiro, a professor of psychology at Penn State University.

Dr. Shapiro is the author of a new book, “And in Health: A Guide for Couples Facing Cancer Together.” His advice can help prevent the diagnosis from damaging one’s most important relationship.

Few know the challenges better. Both Dr. Shapiro and his wife, Terry, have survived serious bouts of cancer. Cancer, he wrote, “is like a tremor that rattles our walls and finds the fault lines that already existed. If we’re not careful, it reaches into our relationships and drags out these subtle differences and magnifies them.”
Dr. Shapiro met his wife in his 20s while undergoing a bone marrow transplant for Hodgkin’s lymphoma, a cancer of the lymph system. After they married, his cancer recurred, and he needed a second bone marrow transplant, which saved his life.

By means of stored sperm, the couple had two daughters. Then cancer struck again. Dr. Shapiro admits that when his wife was found to have breast cancer, he became “nonfunctional, terrified that she might die and fearing I’d have to raise the two girls by myself.” But instead of telling his wife, “I love you a lot — it’s hard to watch this,” he tried to protect her from his fears.

He has since learned that withholding his feelings was a big mistake. “By not being honest with each other,” he told me, “you can create a wedge in the relationship at a time when you both need understanding and support.”

Dr. Shapiro wrote that cancer can cause people to lose their bearings and to push away those they love and most need to help them through the challenges of treatment.

The lessons derived from his own experience and those of 40 other “cancer couples” are elaborated in his book, a kind of Cancer 101 for couples. Among them:

Teamwork Is Essential Even without the challenge of a potentially fatal diagnosis like cancer, people often have difficulty remembering everything doctors tell them and correctly interpreting the information. When couples see doctors as a team, with one assigned to take notes and both able to ask questions, misunderstandings about diagnoses and treatment options are less likely.

If doctors fail to adequately address the patient’s concerns, the couple should decide which partner will speak up. And when both members of a couple are educated about side effects, they are less likely to panic when a symptom develops.

Talk and Touch Whenever and however you can, express and show your love and concern in words, actions and touch. When faced with cancer, Dr. Shapiro’s wife needed him to say, repeatedly, that he loved her. “And she wanted me to take the trash down to the street on time without being reminded,” he added.
Love and support can also be communicated through touch. “A soft nonsexual touch on the arm or shoulder can be a soothing balm when we feel vulnerable,” Dr. Shapiro wrote.

Allow for Mistakes Couples must rely more than ever on patience and tolerance. “Cancer requires a whole new set of skills at a time when most of us are depleted, distracted and scared,” he wrote. Each person should go easy on the partner when “rookie mistakes” occur, like forgetting appointments, losing things or locking the keys in the car.

When people are anxious, they may blame each other for their ill feelings. The psychologist warns against acting on “negative feelings” that inevitably arise, for example, when couples are waiting for the results of treatment. Rather than take out their anxiety on spouses, themselves or anyone else, he suggests, “Do exercise, go for walks, see a movie, talk to friends and distract yourself.”

Nobody Can Read Minds Like Ms. Bantug, patients often expect their partners to know how they are feeling and what they may want, then resent it when unexpressed needs are not met.

A patient’s ability and energy to perform tasks may change from one day to the next. Patients may feel unsupported if their partners expect them to function normally when they feel awful, or they may resent having jobs taken from them when they feel well. It’s better to ask than to assume. Both should “talk about what needs to be done today and who’s going to do it,” Dr. Shapiro advised. He encourages spouses to repeatedly check in with each other about various tasks.

Prepare for the Unknown When Penny Carruth’s husband’s body “shut down” while he was being treated for lymphoma, she didn’t know if he would want to be artificially ventilated. “It seemed like torture — he moaned, groaned and tried to pull off the mask. His hands had to be tied down,” she told me.

In Dr. Shapiro’s book, she urges couples to have a conversation about end-of-life care, making clear their wishes in case a spouse later faces decisions about life support.

“Advance directives are a lasting gift” for those you love, Dr. Shapiro said. One woman he interviewed lost her chance to spend the last months with her husband in the way she wanted because the doctors pursued treatment even as he was dying.


Related Information:
Posted by Unknown at 8:00 AM

Email ThisBlogThis!Share to TwitterShare to FacebookShare to Pinterest
Labels: cancer, Health and Wellness